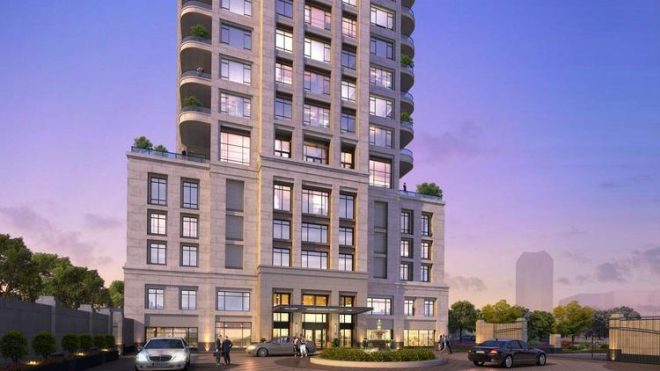 A Chicago developer is hoping to build a 27-story condominium project in Oak Brook that would be more than double the height of the existing tallest building.

Jupiter Realty is finalizing its presentation for 75 to 85 luxury condominium units, each with two or three bedrooms, to be built at 1900 Spring Road.

Jerry Ong, a principal at Jupiter Realty, said Tuesday that he is aiming to bring plans to the village in late spring, with hopes of breaking ground in the spring of 2019 and having units ready for occupancy in the summer of 2020.

Ong said his company’s engineers have been working with the village, DuPage County and the Federal Emergency Management Agency on flooding control for the property.

“We want to be able to assure the village that there are no issues with flooding control, and there aren’t,” Ong said.

Expected to be priced from $1 million to $3 million, the development would offer a variety of floor plans, ranging in size from 1,655 to 4,750 square feet.

In addition to semi-private elevators, residents would have a large outdoor terrace, outdoor pool, spa, golf simulator and 24-hour doorman.

“This is for people who have lived a long time in the western suburbs, are reasonably affluent and don’t need the headache of a five-bedroom house anymore,” Ong said. “We believe it’s a good project for Oak Brook because it gives the village the ability to retain residents that have been a part of Oak Brook for decades.”

Ong said he believes the location is outstanding for a condo development because its residents would have walking access to Oakbrook Center and the many restaurants in that area.

Jupiter Realty has well-known architect Lucien Lagrange designing the project. Some of Lagrange’s notable projects are the Ritz-Carlton Residences, Park Tower and the Waldorf Astoria Chicago.

“Lucien Lagrange is known for his timeless art boutique design, one that is sure to be appreciated by the sophisticated buyers who will call this community home,” Ong said.